I was just blown away by some of these pictures.

Check out this website, it does them justice: http://www.boston.com/bigpicture/2010/02/opening_ceremonies_for_vancouv.html 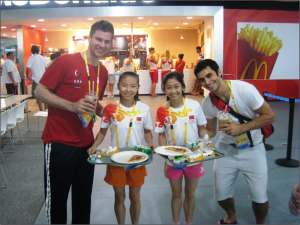 So, do Olympians really eat McDonalds?

I was perusing twitter (www.twitter.com/timmorehouse) and was reading a lot of comments relating  to the McDonalds commercial which shows a lot of celebrating Olympic athletes eating it.

So, what’s the answer?  Well, at the Beijing Games I saw A LOT of Olympians eating McDonalds in the Olympic Village so there is some truth to the commercial images.  The Chinese gymnasts (pictured above) who were marred in the “how old are they really?” controversy eat it pretty frequently and most of the NBA players amongst others.

At the McDonalds Sponsorship house I asked one of their representatives about this and they told me that 25% of the food consumed in the Olympic Village is McDonalds.

So, there is your answer!

I know a lot of parents aren’t too happy about seeing the commercials, but remember most Olympic athletes train 4-8 hours per day or more and eat it in moderation.  So if you need to tell your children something, tell them that!  And, McDonalds, like any product won’t get you to the Olympics…Only hard work will do that!