My vote is for Olympian and NCAA Champion Sam Mikulak’s back tattoo. I’m not really a tattoo guy but if I was ever going to get one it would be of the 5 Olympic rings.

Have you seen any other Olympians with creative places for their tattoo? 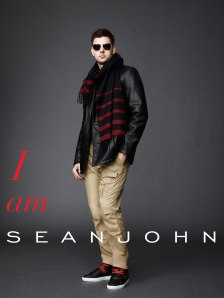 I’m one of the new faces of Sean John Fashion Brand.   This will be appearing in ads and also in Macy’s throughout the country.

Always good to have an endorsement by the leader of the free world!

Fencing in the Schools is launching programs with 1500+ students in 6 Harlem schools and we want to help make fencing a regular part of Physical Education in America to help kids lead healthier lives, to instill Olympic ideals and improve educational opportunities.

Ladies, he fences, cooks/cleans and enjoys long walks in the park…your ideal man in a sword fight or for a romantic night on the town:  James “Jam-o” Williams

(James: you have some admirers!)

Any other requests? Send them my way!

Down at Studio 3rd Ward this week I had a day taking pictures for some new projects.   Photographer Chiun-Kai Shih (who shoots for Vogue amongst other things) did a fantastic job and was a pleasure to work with as always!

I think the pictures will be great!    This is a little preview from his IPhone!  Can’t wait to unveil my new sponsor officially! (some of you I’ve told already!)

Here is the video from my recent appearance on Bloomberg television’s InBusiness With Margaret Brennan.(Her younger brother is a fencer!)

I’m still pushing for that sponsor to join fencing! 🙂

It was a great evening at the Young Collectors’ Night, Winter Antique Show to Benefit the East Side House Settlement.  The event was held at the Park Avenue Armory–a gorgeous facility and I’m sure it’s the nicest looking armory around! (figures for Park Ave, right?)    We attended as guests of Scott Buccheit, who bid up a storm during the silent auction and managed to bring home several great items! (Go Scott!)

Courtney, her art collection and the slice of pizza that brought us together

Guest of a Guester Ariel Moses was also in attendance along with several hundred well-dressed guests.   The quote of the night: “everyone looks great, but it’s all stuff from the closet because no one is buying any new clothes!” (Definitely true for us!)

The event featured some amazing collections, with 75 exhibitions from  specialists in American Antiques and works of art.  Everything from Shaker folk art, to Colonial art and aesthetic movement pieces.  We especially enjoyed the George Washington on display in Courtney’s booth, although truth be told our hunger and the slice of pizza she was eating was the initial draw.  It turned out to be a win-win situation since we both discovered the location of pizza  and got to check out her amazing paintings!

From there Jason and I headed to the Hell’s Kitchen Premier Party at Hudson Terrace while Scott went home to drop off his winnings.  As we got out of our cab we immediately ran into our friend–the positive celeb blogging phenom Micah Jesse. (we hadn’t seen him since the Michael Phelps “hosted” bowling event at Bowlmore in September…we missed him!)

It was a fun party– we did a little red carpet walking with Micah and met one of the contestants on the show, Seth Levine, who, quite dramatically, was nearly eliminated on the premier episode!  (luckily he survived to next week or that would have been one big party downer!)   Keith Richard’s daughters Theodora and Alexandra dee-jayed, while Seth’s sister, designer Alisha Levine, and many other of his family members partied along with actress Sophia Bush of One Tree Hill and the movie John Tucker Must Die fame. (one of Jason’s favorites)  They seemed very excited to meet us as well, and hopefully we will have them fencing in the near future!

I’m also thinking Jason and I should start dee-jaying soon…it seems to be the new hot trend!  Although my ipod filled with 80s ballads, indigo girls and the Dixie Chicks might not get the party going too well!